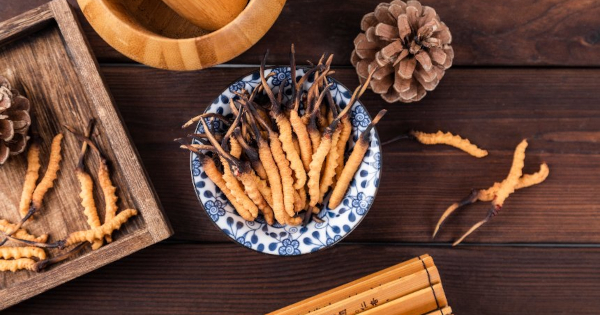 If you want to add years to your life AND life to your years, why not take the “tonic for all ills” — a funky fungus that grows on caterpillars: Cordyceps sinensis

In the world of natural wellness, medicinal mushrooms are renowned for possessing potent healing properties for both the body and mind. One of the most heralded and curious of these revered mushrooms is Cordyceps sinensis, or caterpillar fungus, which technically isn’t a mushroom at all. Cordyceps sinensis is a parasitic fungus that grows on caterpillar insect larvae, eventually consuming and mummifying its host.

This rare fungus, originally discovered by yak herders in the Himalayan mountains, was observed to produce stronger, more hardy livestock when grazed on cordyceps-forested pastures. Eventually, local herbalists began to test its properties on humans, discovering a miraculous ability to enhance one’s vigor and vitality, properties for which cordyceps are still prized today.

Cordyceps has been highly valued for thousands of years as both food and medicine, with traditional Himalayan healers prescribing cordyceps tonic to treat “all illnesses.” The tonifying properties of cordyceps sinensis have been studied in modern times in an attempt to understand what the ancients have known for centuries about these magical fungi.

Some of the properties of cordyceps sinensis that have been scientifically validated are:

We’ve identified some of the top uses for cordyceps sinensis that may enhance your vigor, protect your health and even increase your lifespan.

A 2009 study on antiaging explored Cordyceps sinensis extract’s (CSE) effects on memory and learning, age-related enzymes and sexual potency in mice. Results showed that CSE increased the activity of beneficial enzymes, while lowering oxidative activity that can contribute to aging. CSE proved beneficial to both brain function and sexual ability by enhancing performance on maze and avoidance tests and reducing latency (downtime) during sexual activity.

These findings suggest that cordyceps has antiaging and aphrodisiac properties. By enhancing memory, sexual performance and boosting the body’s enzymatic and antioxidant activity, cordyceps supports the maintenance of healthy bodily functions that typically decline with age.

Heart disease is the leading cause of death in the U.S. If living a longer, stronger life is your aspiration, consider the science on cordyceps’ ability to tone and fortify your heart for the long haul.

Studies on mice include a double-blind, placebo-controlled trial demonstrating that mice fed a diet enhanced with cordyceps sinensis were able to swim significantly longer than control mice. Results were dose-dependent, with one group demonstrating a 30% increase in endurance and another group showing a tremendous 73% endurance increase. The study concluded that it was cordyceps’ “cardiotonic action,” or ability to tone and improve heart muscle function, that boosted the ability and endurance for exercise.

Asthma can be a minor condition for some, causing wheezing and shortness of breath that must be moderated with steroidal inhalers. For others, asthma is a life-threatening condition that seriously affects quality of life. During an attack, airways tighten and constrict and can become filled with mucus, causing difficulty breathing and chest pain that may become debilitating or even fatal.

Cordyceps sinensis was evaluated for asthma in a 2001 animal study that showed oral application of a fermented, powdered form of the fungus significantly inhibited asthma  in animal models. The powdered cordyceps alleviated bronchial challenges to breathing during an asthma attack and inhibited the production of antigenic white blood cells associated with inflammation of lung tissue.

A later study investigated the effects of cordyceps capsules on airway inflammation of asthmatic patients and its suitability as a therapeutic intervention. Sixty patients with moderate, persistent asthma were randomized into a treatment group or control group, with the treatment group receiving inhaled corticosteroids and as-needed beta-agonists to relax constricted airway muscles. The control group received the same treatments plus cordyceps capsules for a period of two months.

Results showed that administration of cordyceps capsules, in addition to normal treatment methods, reduced serum markers of airway inflammation by regulating the body’s response during asthmatic flare-ups. Researchers suggested that cordyceps may even reverse damaging airway patterns that occur with asthma, though more research is required.

Similarly to asthma, chronic obstructive pulmonary disease(COPD) refers to a group of conditions in which the sufferer has difficulty breathing. Chronic bronchitis and emphysema afflict millions of people in the world, with millions more suffering undiagnosed and untreated. Symptoms of COPD include labored breathing, wheezing, coughing and mucus production.

Cordyceps’ powerful antioxidant profile, along with its traditional application as a treatment for “all illness,” led researchers to test cordyceps as a tonic to soothe the lungs of patients with respiratory diseases. Their aim was to test the effects of cordyceps sinensis on airway remodeling in patients with COPD and investigate the underlying molecular mechanisms of these actions.

Your kidneys play a critical role in overall health by filtering and removing waste products from your body. When kidneys become damaged, they can’t adequately filter your blood, increasing the risks from other diseases and putting you at risk of kidney failure. Cordyceps has been evaluated in modern times for its ability to support kidney health, and this curious fungus did not disappoint.

Cordyceps Sinensis: A Tonic for ‘All Ills’

Cordyceps sinensis is a rare and expensive mushroom that is considered endangered, commanding a premium on the open market. Mycelia of domestic strains of cordyceps contain the same pharmacological compounds and properties and are much easier to cultivate domestically. Cordyceps militaris is a common variety found in supplements, containing the same bioactive compounds as cordyceps sinensis, although in varying concentrations.

Disclaimer: There is no medical advice here and opinion here may not necessarily reflect that of GQ and it’s staff.