A politician in the far-right AfD called guest workers “scum.” Now Germans with migrant relatives are defending their families’ honor — and using the far-right party’s own inflammatory words against it.

“For years, my uncles worked day and night on the assembly lines at VW and Conti. They never complained, they were thankful for the jobs that they had. They always showed up on time so their children could have a better life,” German-Yazidi journalist and filmmaker Duzen Tekkal wrote on Twitter. “We’re not going to allow people to defame Germany’s immigration history with words like scum.” 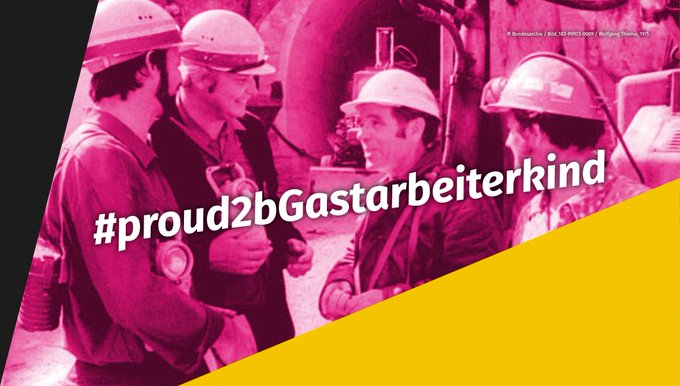 99 people are talking about this

Tekkal is not the only one defending the honor of her family against the words of Alternative for Germany (AfD) politician Nicolaus Fest. In 2017, Fest wrote, “We called for workers, but we got scum.” Fest was paraphrasing a well-known phrase from Swiss author Max Frisch: “We called for workers, and people came.” Fest’s post, as well as other statements he made around the time, sparked an investigation for incitement, which was later dropped.

Using the AfD’s own words against it

About a week ago, Fest’s post showed up again, this time on that Facebook page “We are going to hunt them” that criticizes AfD politicians. The page’s name plays on similar words spoken by AfD parliamentary caucus leader Alexander Gauland after the results for the 2017 German parliamentary elections came in and the AfD entered the federal parliament. He declared that his far-right, populist party would “hunt down” Chancellor Angela Merkel, claiming, “We are going to take our people and our country back.”

“May these statements be seared into the last brain cells of those who are still sympathetic to the AfD,” the group wrote on its page. “The main thing is that, in the end, no one will be able to say they didn’t know what was happening.” Within days, the page had nearly 25,000 followers.

After Fest’s remark appeared on the page, Germans with immigration backgrounds defended their parents and grandparents against the politician’s racist and defamatory words.

“Mom worked 50 years in a factory and was the only woman. She got about €600 pension and died of cancer. Thanks to this scum, I went to university,” Eglence wrote. “@everyone who think they can divide the AfD into one extremist wing and another wing. You can’t.” 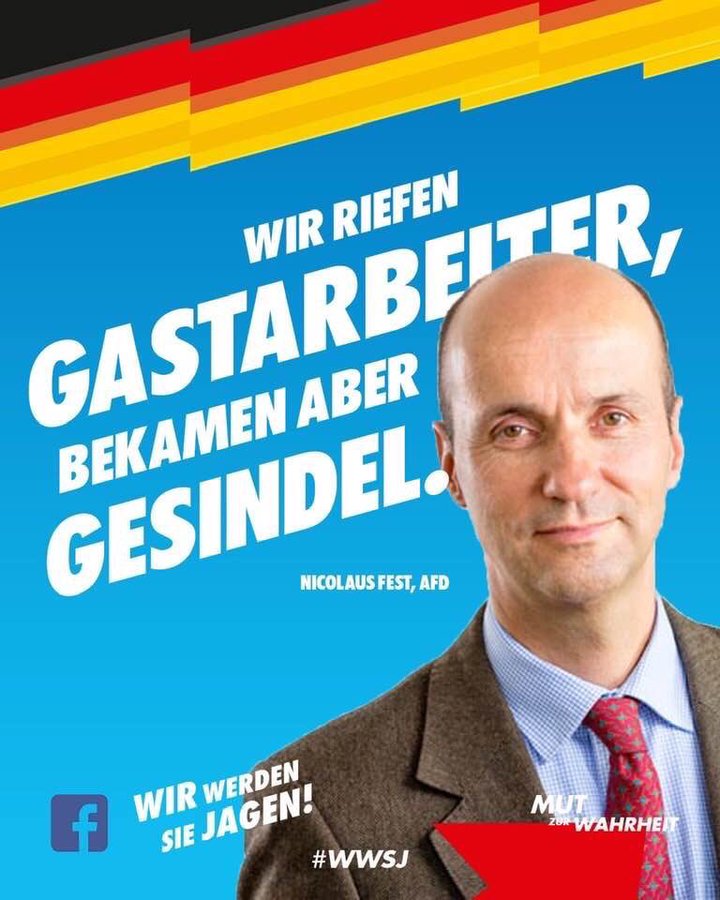 199 people are talking about this

“My father worked here for 30 years, ‘without one day sick,’ as he always says,” Guler said. “He singlehandedly fed his family and got nothing for free and he didn’t want anything for free. ‘Thank you, Germany,’ he says to this day. He is not scum. But you are a racist.” 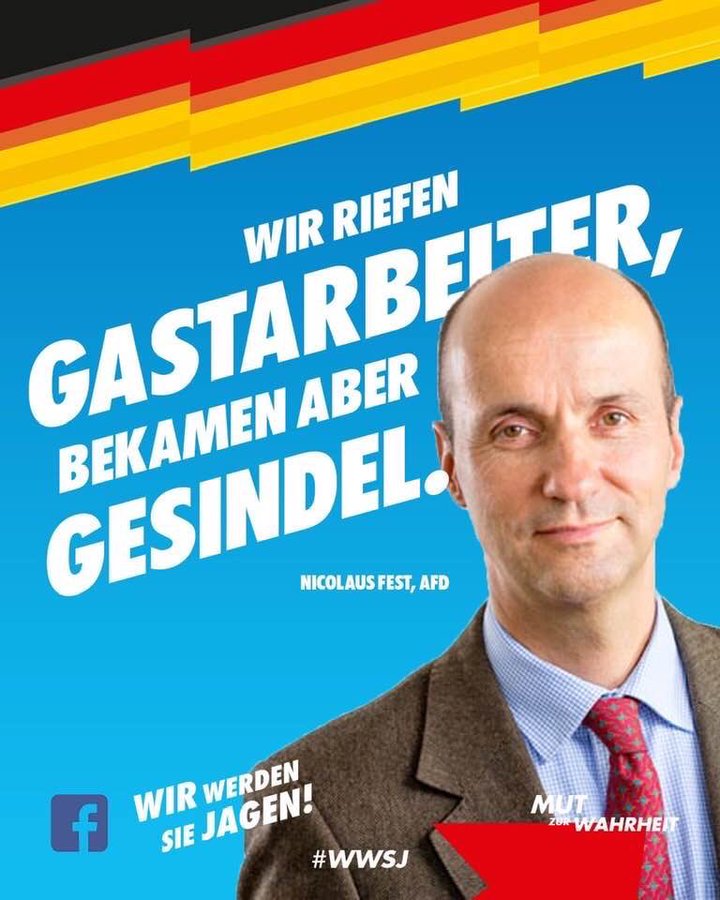 639 people are talking about this

“I am the daughter of a guest worker. Today I am proud to serve as a navy officer of our homeland,” Hammouti wrote. “This is where we are from.”

291 people are talking about this

They came as guest workers

Like Eglence, Guler and Hammouti’s parents and grandparents, many so-called guest workers came to the Federal Republic of Germany in the 1950s and 1960s. The economy was booming, but the country needed a larger workforce. Workers arrived from Italy, Greece and Spain, and after 1961, from Turkey. Germany and Turkey even signed a labor recruitment agreement. Though it was only two pages long, the document paved the way for many workers to come to Germany to build a new future.

Now, generations later, those former guest workers and their descendants are an integral part of German society. Fest, however, still has more to say. On his Facebook page, he wrote that the quote was “taken out of context,” and added a “fake” sticker to it. Then he added, “By the way, I am convinced that there is nothing wrong with using the term ‘scum’ to refer to imported honor killers, clan members, anti-Semites and torturers.” A statement that appears to be an attempt to reconstruct the context of the original quote he, himself, deemed fake.

Increasingly, accusations that the AfD’s use of dehumanizing rhetoric has moved into the realm of “intellectual arson” are mounting. Most recently, accusations made naming the AfD as partly responsible for far-right extremist attack on a synagogue and a kebab shop in the eastern German city of Halle that left two people dead.

The discussions come as the eastern German state of Thuringia prepares to elect a new state parliament on Sunday. The AfD state party there is led by Björn Höcke, the modern-day poster child for far-right incendiary rhetoric. Höcke has repeatedly made headlines for his use of language that is starkly reminiscent of Nazi jargon.

Höcke, who wants to move the party even farther to the right, formed a group of hardliners into an inner-party caucus known as “The Wing.” The group is under constant surveillance from Germany’s intelligence services. Early polling suggests the AfD will be the second-largest party in Thuringia after the vote.