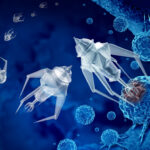 Scientists across the globe are adamant that the COVID vax is laden with nanoparticles.  Though the mainstream media isn’t exactly eager to shine the spotlight on nanotechnology, this seemingly futuristic tech has been selectively featured in forms of entertainment such as Generator Rex.

Those with an allegiance to the truth and willing to perform their due diligence are aware that none other than Elon Musk has admitted mRNA-based vaxxes can be used to manipulate and possibly even control the human body.  The scientific community is now echoing Musk’s sentiment, revealing the nanotech used to create mRNA COVID shots contains graphene oxide.

Nanotechnology – a prerequisite for the transhumanist agenda

Nanotechnology has the potential to revolutionize the medical industry and prolong lifespans, yet it also has the potential to be used to disable human autonomy.  In layman’s terms, nanotechnology is microscopic particles implemented into the human bloodstream through injections and other means in a supposed attempt to thwart viruses and other biological threats.  However, those willing to dig deep into nanotechnology, medical implants, and the overarching transhumanism push find it is nothing more than a means of authoritarian control.

Nanoparticles within mRNA injections, such as those made by Moderna and Pfizer, can potentially be used for human control.  Honest scientists with a strong moral compass are now coming out of the woodwork, insisting even the Janssen and AstraZeneca injections contain nanotech with graphene oxide.  Such nanotech alters humans at the atomic and molecular levels, meaning it is unseen yet very real.

What is so wrong with graphene oxide?

Let’s shift our attention to graphene oxide contained within the mRNA injections. Graphene oxide and nanotech are considered pathogens to the immune system.  Scientists in Spain and elsewhere insist the injection of graphene oxide into the human body has the potential to compromise the nervous system and cause strokes and paralysis.

The scientific community also insists graphene oxide can lead to the formation of blood clots, as evidenced by the heightened risk of thrombocytopenia occurring after mRNA coronavirus injections.

A Canadian doctor named Daniel Nagase is on the record stating Moderna and Pfizer vaxxes analyzed under a regular microscope reveal no biological material.  However, when studied under an electron microscope, Nagase’s team found what looked like a tiny ball with limb-like protrusions extending outward.

Evidence of nanotech manipulation is mounting

Another doctor based in Argentina, Martin Monteverde, conducted an in-depth analysis of nearly half a dozen variations of the coronavirus jabs.  Monteverde found the AstraZeneca vax to be laden with graphene after studying a COVID jab-induced death.  Add in the fact that physicians in the United Kingdom, using spectroscopy analysis, found glass shards, iron oxide, and graphene in vax samples, and there is even more reason for concern.

Though the scientific community does not unanimously agree that COVID shots cause magnetism, it is clear that the nanotechnology within these injections has the potential to be used for nefarious purposes.  So the question remains: when will people awaken in large enough numbers and recognize that the overarching aim of the soon-to-be promised “tech transcendence” is nothing more than an attempt to force humanity to surrender body and mind to oppressive authoritarians?

Disclaimer: This article is not intended to give any medical advice, what you do with your body is your choice.