Watch out! If you are over 50, your government is a threat to your life 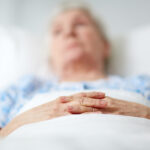 In a culture obsessed with what lives matter and which lives are more precious, it’s time for someone to stand up and say, “Old Lives Matter.”  And in truth, this should be given high regard because “old” comes in all colors, all genders, and all pronouns.

And unless death takes you early, everyone will become a member of that “old” population eventually.  Yet the elderly are some of the most overlooked, neglected, and abused human beings in the world today.

Britain’s bleak and brutal policies for the elderly

The British government has made it an official policy to leave the elderly to die instead of providing lifesaving treatment.  Hospital staff, doctors, and nurses are instructed to neglect the needs of their elderly patients, depriving them of food and water.  The end goal is to pass on instead of utilizing hospital beds that could be used for more viable, worthy, valuable patients.  Staff at nursing homes have even been authorized to sedate their elderly patients without first informing them or getting their consent.

The worst part is that this is not some sci-fi tale playing out in a book or on the big screen.  It is happening in real life in OUR world right now to real, living, breathing human beings.

Human beings who have been deemed inconvenient or, in a way, devalued and determined to be unnecessary to the point that they are basically exterminated.

How old is too old to be deemed unworthy to live?

Now, when talking about the elderly, images of a feeble old woman in her 80s or a bedridden little old man who’s approaching 90 or so often come to mind.  Yes, 90 may be old, and 80 may be old, but for these policies, the official old age is 60.

However, the measure is slipping even lower, and in many hospitals (whose numbers are growing at an alarming rate), the bar for denying resuscitation due to “old age” is 50.

A 50-year-old person can be denied resuscitation, regardless of their wishes or the wishes of their family, because they are basically too old to be useful to society.  They are deemed a burden that the government cannot or is not willing to afford.  If they, these human beings, cost too much to keep around, just get rid of ‘em.

And your government could be next.

In truth, it is only a matter of time before Britain’s policies are adopted by the United States.  As barbaric as it seems, the almighty dollar will always win out.  Old people are expensive to the government.  In the US in 2020, Medicare spending hit $829.5 billion, which is about 20% of the total National Health Expenditure.

Older US adults are already struggling to balance basic needs and healthcare.  A recent Gallup Poll found that more than 1 in 3 adults in the US, age 50 and older, have foregone basic necessities such as food in order to pay for their healthcare needs.  And the older they are, the worse it gets.

How soon before our government gets sick of footing the healthcare bill and, instead of taking aggressive steps to make healthcare affordable, just begins to eliminate the “problem,” taking a page from Britain’s book?

Who gets to draw the line on the value of human life?

Want to live a long life?  Take charge of your health

This is a looming issue that does not have a clear solution – or even a viable means of prevention.  We can look a little harder at who we elect into office and hope that they will support policies that promote life for all ages.  They can’t all be egotistical narcissist with a god complex, can they?

We can also begin now to take care of our bodies in hopes that good health practices will prevent many age-related maladies.  An organic diet that is free from highly processed foods, GMO foods, and lab-created meats is a good start.

But ultimately, rallying together as a family and a community and taking care of our own is the only true way to stay in control and prevent these atrocities from occurring.  Because they will occur, it’s just a matter of time.

Opinions here may differ from that of GQ or it’s staff.