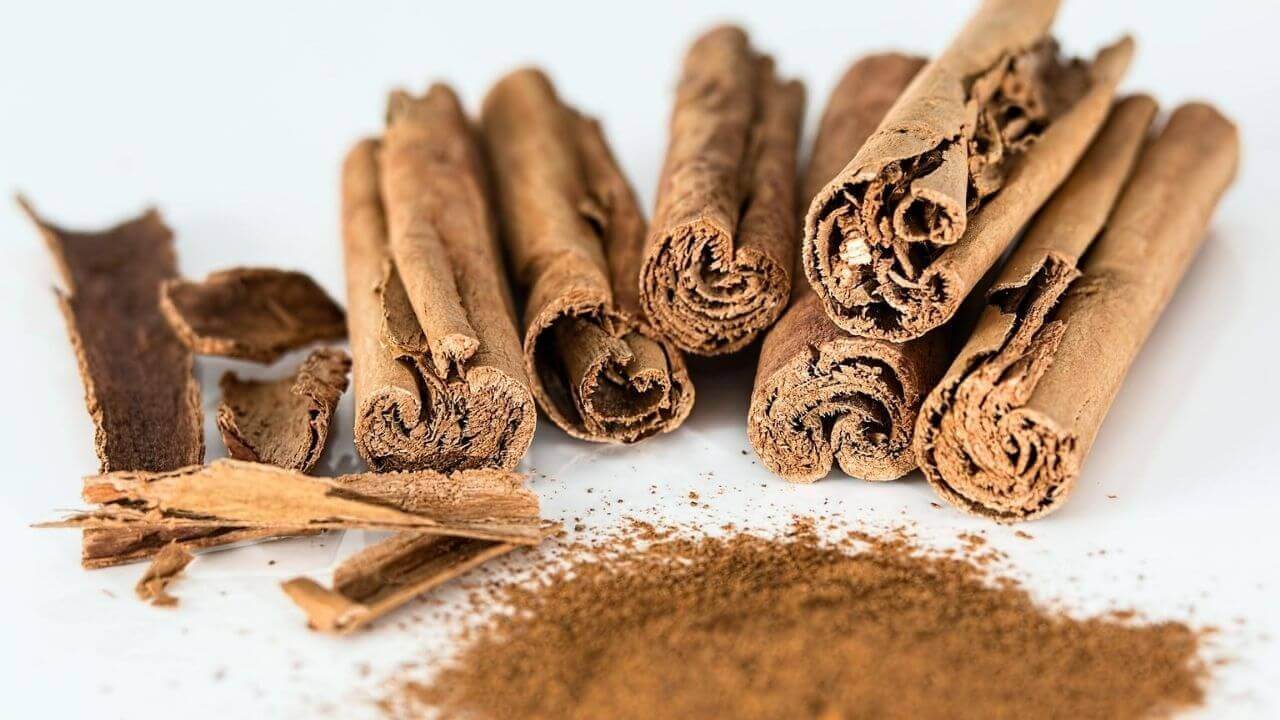 Cinnamon essential oil benefits the body in so many ways that you may be surprised that the warm, spicy, fragrant, and powerful remedy can even be dangerous. Even as a potentially sensitizing and irritating oil, we shouldn’t make the mistake of avoiding cinnamon altogether. There are many benefits of this classic spice and essential oil.

While we know cinnamon as simply sticks, powder, or oil, there is much more to it than a simple cinnamon source. The flavorful “sticks” we know are derived from the inner bark of a Cinnamomum tree, of which there are many different varieties. In fact, cassia essential oil comes from a cinnamon tree – Cinnamomum cassia. This is a different essential oil though with it’s own therapeutic benefits. This post is going to discuss cinnamon essential oil uses though and we’ll save cassia for a different article.

As always, variety effects composition, and cinnamon essential oil most commonly comes from the Cinnamomum zeylanicum tree. From there, either the inner bark or the leaves can be harvested for distillation. This should be indicated as either “cinnamon bark” or “cinnamon leaf” on your bottle of essential oils.

And yep, you guessed it: the bark and leaf oils have their own composition, as well.

Cinnamon leaf is typically more heavily filled with eugenol – used to relieve pain and inflammation and fight bacteria – while the bark is comprised more of cinnamaldehyde – potent as an antioxidant and antidiabetic.

One of the oldest and most beloved spices, cinnamon was prized in ancient times as a costly and decadent substance, usually burned for its aroma. Biblical mentions include cinnamon as a “choice spice” and part of the holy anointing oil of Exodus.

Further east, cinnamon was used in medicinal preparations in the Ayurvedic model of medicine. It was thought to be “warming” and was used as an antimicrobial treatment or protective substance.

Over time, the spice trade waned and culinary preparations became standard, at least in the Western world. The ability to distill essential oils specifically has opened up another avenue of use for us, and extensive research on this ancient spice has confirmed both aromatherapy uses and medicinal whole-spice uses.

Because the leaf and bark oils work differently, I’ll note where one is preferred over the other. The safest use for essential oil is aromatic, via sprays and diffusion or inhalation methods. Some internal and topical use can be utilized as well, though, as long as you carefully dilute and use appropriate amounts. With that in mind, here are the top 5 uses for your cinnamon essential oil.

Cinnamon oil is well known as antibacterial, and that is translating to varied uses as researchers begin to think outside of the box. In 2015, a couple of interesting studies were released for uses of cinnamon’s antibacterial strength.

The first combined antibiotic doxycycline with isolated components of 3 essential oils, one of which being cinnamon – with all three components (carvacol, eugenol, cinnamaldehyde) found in both cinnamon leaf and bark oils. The combination had a synergistic effect, which could imply some answers to the problem of antibiotic resistance!

The second addressed an issue on our minds for awhile now, that of oral health with natural products. Cinnamon oil on its own was protective against an array of oral bacterial colonies. The oils didn’t contain prominent levels of cinnamaldehyde, indicating a potential preference toward leaf oil.

A much earlier study had confirmed more traditional uses for this antibacterial oil – relieving bacterial respiratory conditions. Of the essential oils tested in 2007, cinnamon and thyme rose to the top as most effective against respiratory infections.

We know that cinnamon as a whole spice can be used for anti-diabetic purposes, helping to lower fasting blood sugar levels. Further research is diving into the way this works, and some studies have found specific compounds of cinnamon are responsible for the effect – compounds also found in the essential oil.

These results are promising, and it will be interesting to see how it ultimately plays out. Diabetes affects a large swath of the population, and natural remedies are needed now more than ever.

Indications: One or two drops diluted in a lipid and included in recipes; inhale or diffusion; whole-spice culinary inclusion.

Especially with such a strong and potentially irritating essential oil like cinnamon, blending and dilution are important. Fortunately, the oils seem to work even better that way. A 2013 study demonstrated the effects of synergy on fungal infections, with the lavender and cinnamon blend performing the best.

Incidentally, lavender soothes what cinnamon may irritate! When creating your blends, use small amounts of cinnamon to enhance the other oils in the combination for an overall effective result.

Traditional medicinal uses of cinnamon essential oil include protecting the digestive system. The whole spice is still indicated for this purpose, but aspects of the essential oil are finding their way into studies on this topic, as well.

Eugenol, for example, found in the cinnamon leaf oil, was the subject of a study in 2000. It was found to have a protective effect on the mucosal lining against ulcers and lesions. More recently, in 2015, both eugenol and cinnamaldehyde were explored as additives in animal feed for intestinal protection.

Both cinnamon leaf and bark oils could be utilized here, though the leaf is much milder in taste and should contain the eugenol content that is recurring in studies.

Indications: One or two drops diluted into a lipid and added to recipes; whole-spice use in culinary preparations.

Last, but certainly not least, is cinnamon essential oil’s ability to fight cancer. Eighty studies to date have investigated cinnamaldehyde’s ability to inhibit tumor cell proliferation via trigger cancer cell apoptosis (“programmed cell death”) and other mechanisms and the research is clear: cancer patients should be encouraged that natural solutions truly do exist!

For all of its known benefits, cinnamon oil is also known as a sensitizer. And keep to 1% max dilution and no more than 2 drops per culinary dish. Remember that oil and water don’t mix, so dilution should happen first in a lipid like coconut oil or another carrier oil.

Disclaimer: This article is not intended to diagnose, treat or cure any disease.